An early First World War recruitment poster. There was no official ‘Oarsman’s Battalion’ but some crews joined their local regiment en masse. The idea that war was ‘the greater game’ could not have lasted very long.

This week marks the 99th Anniversary of the outbreak of the First World War. The actual day is open to choice. Austria-Hungary declared war on Serbia on 28 July, 1914. Germany declared war on Russia on 1 August and on France on 2 August. Britain declared war on Germany on 4 August.

During the period 1914 to 1918, five million British men served in the armed forces. Initially they were all volunteers and conscription was not introduced until seventeen months into the conflict. The poplar view of the early months of the war is of young men desperate to join up in case hostilities ended before they could take part in a great adventure. Adventure may not have been everyone’s reason for joining the ‘citizens’ army’ as there was also enormous peer pressure from workplaces, friends, families, sports clubs, schools, colleges and social groups. Whatever their reasons, oarsmen would have been among the first to join up. They were young and fit and had a bond with their crew mates that only one of the ultimate team sports can produce. Sadly, for many the 1914 rowing season was to be their last.

My own club, now called Auriol Kensington, has pictures of two 1914 crews on its walls. The Kensington Junior Eight that won at Molesey lost four members by 1918 and the Auriol eight that raced at Henley lost three. In all, both clubs lost a total of twenty-four men who were members at the outbreak of the War. This would not be untypical.

The memorials subsequently erected to by clubs to remember their crew mates killed is a subject that HTBS has covered several times. We have noted those in Thames RC, Auriol Kensington RC, Vesta RC, and Marlow RC. While it is common for British rowing clubs have war memorials, on my recent visit to Vancouver Rowing Club (VRC) in Canada, I was reminded of the sacrifices made by men from what was then the British Empire. VRC has a bronze plaque listing the names of the 164 men who volunteered for active service including the 38 who were wounded and the 38 who were killed, a death rate of twenty-three per cent.

The list of those members of Vancouver RC who served in the 1914-1918 War. Those marked with a star were killed, those marked with a bar were wounded. A similar memorial exists for the 1939-1945 War. (Click on the image to enlarge.)

Back home, I have recently become aware of an oarsmen’s memorial that has two differences to any others that I know of in the UK. First, it commemorates those rowers killed not from a club but from a city, and second, it is sited outside, not in a clubhouse. 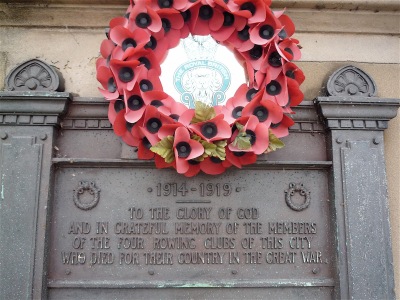 Detail from the Nottingham Memorial.

The Memorial and a wider view of its place over the River Trent.

Examining the military ranks listed on the memorial is interesting and perhaps gives some indication of the social makeup of the Nottingham clubs. The fifty-five are made up of fourteen private soldiers, five non-commissioned officers (sergeants and corporals), twenty-eight 2nd Lieutenants and Lieutenants, five captains and three majors. Thus half were the most junior commissioned officers, that is 2nd lieutenants and lieutenants, men who led a platoon of fifty soldiers.

In his 2010 book, Six Weeks –  The Short & Gallant Life of the British Officer in the First World War (Weidenfeld & Nicolson), John Lewis-Stempel attempts to disassociate the junior officers from the seemingly idiotic high ranking officers who appeared to have no ideas beyond sending wave after wave of men headlong into machine gun fire (‘lions led by donkeys’). Lewis-Stempel says that the two most junior officer ranks often suffered a casualty rate twice that of private soldiers and that their average life expectancy on the front line was six weeks. Until 1917 they mostly came from public (which in the UK means private) schools. The top fee paying schools had casualty rates of twenty per cent. In four years, 1,157 Old Etonians were killed (though as the War went on and the ‘officer class’ was rapidly decimated, ‘temporary gentlemen’ from middle and working class backgrounds had to fill the void).

That the upper classes suffered disproportionally can also be seen in the casualty rates of those oarsmen who were obviously from socially privileged backgrounds. This forum lists the forty-two Oxford and Cambridge Rowing Blues who were killed, all of them officers. The book Henley Races by Sir Theodore Cook (Oxford University Press 1919) is available online and lists the two hundred and seventy Henley competitors who are known to have died. In both lists, half were 2nd Lieutenants and Lieutenants with thirty per cent holding the rank of captain. The Oxford-Cambridge split is exactly half. A deadly noblesse oblige.

My thanks to Ian Scothern for taking the Nottingham pictures for me. Also, some may have noticed the second name on the memorial, that of Albert Ball VC, a First World War ‘Ace’. I am investigating further but I suspect that Ball’s connection with NRC may have been somewhat tenuous.