In 1909, the American songwriter- and composer-to-be, Cole Porter (1891-1964), was admitted to Yale University. According to the entry about him on Wikipedia, he majored in English, minored in music and he also studied French. Porter was a member of a couple of the ‘secret societies’ but also in some song and music clubs at the university. While at Yale, it is said that he wrote about 300 songs, ‘including student songs’, Wikipedia tells us, ‘such as the football fight songs “Bulldog” and “Bingo Eli Yale” (aka “Bingo, That’s The Lingo!”) that are still played at Yale today.’ After graduating in 1913, Porter left Yale for Harvard, where he was to study law, or so his maternal grandfather James Omar ‘J. O.’ Cole, ‘the richest man in Indiana’, had decided. Of course, it did not take long before Porter switched from studying law to music at Harvard. In 1915, he had his first song on Broadway.

Now, what does this have to do on HTBS? Well, here is the connection between Cole Porter and the sport of rowing. On 24 April, 1914, The Yale University Dramatic Association presented PARANOIA or Chester of the Y. D. A. at the Annual Smoker. Porter was the songwriter and in the production is the song “I Want to Row on the Crew” where one chorus line goes ‘Swing, Swing, together!’ and the solo and refrain thereafter goes:

In a voice that might rival Apollo’s,
He expressed his intentions as follows: 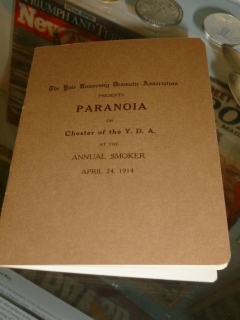 A copy of the little programme PARANOIA or Chester of the Y. D. A. is to be found in the rowing exhibit ‘Let Her Run’ at Mystic Seaport, Mystic, Connecticut, (the Thomas E. Weil Collection).