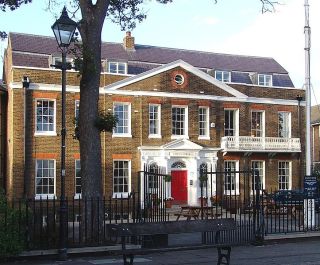 Regarding last Sunday’s post about the Sons of the Thames RC, rowing historian Bernard Hempseed writes from New Zealand:

According to page 111 in The Aquatic Oracle, published in 1852, there was a crew who rowed in a boat called the “Sons of the Thames.” The boat was four-oared. They won the first prize of 1,000f (franc) at Havre Regatta in July 1840. The crew were Robert Doubledee, Robert Newell, John Doubledee, Robert Coombes at stroke, and David Coombes as cox.

Whether this crew had any connection to the later group of the same name would require more research. I suspect that “Sons of the Thames” would have been some sort of generic name. The Aquatic Oracle is a mine of information on early professional races and can be downloaded off the net, here.

An interesting aside would how the club got its shield or nominal coat of arms. It’s a bit of a mixture – a horse designed by a committee!