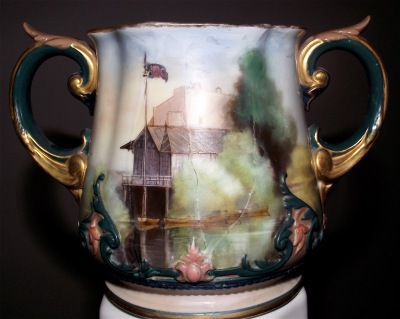 Will Lunn’s prize – both were from Worcester.

Perhaps my favourite item in my small, eclectic collection of rowing memorabilia is a porcelain cup won by a member of Worcester Rowing Club in the intra-club races of 21 September, 1905. It appeals to me on at least two levels. Firstly, it is an attractive object, manufactured and hand painted by masters of their craft. Secondly, I have full provenance. I know who won the cup and where the cup itself was made. Pleasingly, both of them were local to Worcester.

The back – or is it the front – of the Royal Worcester Loving Cup.

Worcester today is a city of 100,000 people. It is situated on the River Severn in the county of Worcestershire in the English West Midlands, thirty miles south west of Birmingham. The rowing club dates its founding as 1874 but, as the history section of its website shows, W.R.C. is an amalgamation of several earlier clubs (some dating from the 1840s) and there are records of a local regatta held as early as 1845. The website claims ‘…organised rowing races occurred at Worcester some 210 years ago’ but gives no evidence of this. The city is arguably most famous as a centre of fine porcelain making between the years 1751 and 2009. It was so successful in producing classically English china that successive British Monarchs granted the title ‘Royal Worcester’. Over the years the industry employed some of the best and most innovative ceramics artists. These painters often specialised in different images such as birds, fruit, cattle or flowers. Latterly they would sign their works to distinguish them from cheaper versions that used transfer prints.

A regatta at Worcester in the early 1900s. The clubhouse, backed by the racecourse grandstand, is on the right. For some reason it is flying the flag of the Royal Navy.

My ‘pot’ is a 4 1/4 inch high loving cup made by Royal Worcester between June and September 1905 and painted and signed by the artist, Walter Powell. A ‘loving cup’ is a shared drinking container, usually with two handles, traditionally used in a complex ceremony at weddings and banquets but latterly more often used as a trophy. A stamp on the bottom clearly identifies the cup as made by Royal Worcester in 1905. It is also marked ‘Hadley Ware’, a name which was used between June 1905 and March 1906 for items produced at the factory in Diglis Road, Worcester.

Another regatta at Worcester from the same era but with a different view of the clubhouse and grandstand.

Walter Powell painted between 1900 and 1950 and became best known for his depictions of small British birds. On one side of the cup he painted the old Worcester Rowing Club boathouse, serenely nestled among the trees, club flag flying and the rear of the grandstand of Worcester Race Course poking out from behind. The other side of the cup has the name and arms of W.R.C. and the legend, ‘Club Races September 21st 1905’. It seems that this was not the only prize that the club commissioned from a local pottery. There is an even more splendid example from 1903 for sale here. The picture of the boathouse is not exactly the same on the two trophies but this is what you would expect from hand painted pieces. As a piece of rowing memorabilia, I would suggest that it is overpriced at £1,850 but this may be the going rate for good Royal Worcester. The seller says:

‘… the quality of the painting is superb, as would be expected for a special commission, and would have been entrusted to one of their best artists such as Walter Powell or Harry Davis.’

While the origin of the cup itself is of no doubt, we also know the identity of the winner – and even have a picture of him taken in 1906. His name was Will Lunn and he was a relative of the lady that I bought the item from. I know nothing more about Will, but the lady also provided information about another relative, Thomas Lunn (Will’s father?) who was also a successful rower with Worcester in the 1870s. He was a local pharmacist who sold ‘”…a wonderful pain killer, Lunn’s Electronic Embrocation, ‘electrical’ in its action on rheumatism, sciatica, neuralgia, chest colds, pleurisy and all nerve and muscular pains’”.

Perhaps this was the secret of the Lunn’s rowing success? Whatever the reason, the picture shows that Will amassed some splendid trophies. I like to think that he enjoyed the one(s) made a short walk away the most.

Worcester RC, 1906. Tom Cheesewright (left) and his cousin Will Lunn. The Loving Cup is at the front right, behind the bowl.