Everyone loves The Wind in the Willows and the recent post Colonel F. C. Ricardo was Toad? – by HTBS editor Göran R Buckhorn reminded me that there are numerous online personality quizzes that can help you decided what character in the book you are. The one on quibblo.com satisfied my curiosity and revealed that I am in fact, Ratty (which I knew anyway!): “He is devoted to his interests, he loves nature and peacefulness. He is very intelligent and he is very outspoken and poetic”.

I would go as far as to say that you don’t need online quizzes to find out which character in the book someone is; a little people-watching in the Stewards Enclosure at Henley Royal Regatta soon reveals all!

Something else that was of interest to me in Göran’s post was the fact that ‘Toad’ was in the Eton crews that won the Ladies’ Challenge Plate at Henley in 1869 and 1870, and he was Captain of the Boats at Eton in 1870 and 1871. All throughout 2011 and up to May of this year, I was researching the story of The Rowing Bunburys of Lisnavagh. This is the story of the McClintock-Bunbury family from Lisnavagh, Rathvilly, County Carlow, Ireland, who between them won the Ladies’ Plate seven times (1867, 1868 (2), 1869, 1870, 1896 and 1897), all for Eton College; the Grand Challenge Cup once in 1871 for Oxford Etonians and had a seat in the Oxford crew in the 1871 Boat Race. The decorated pencil oars for seven of the Henley wins are now displayed in my home club – Carlow Rowing Club. The research of 6,000 words and numerous photographs rambles through the wins of Tom (later Lord Rathdonnell), his brother Jack and Tom’s son Billy and the characters they encountered and rowed with at Eton College. It was published recently in Carloviana, the journal of the Carlow Historical and Archaeological Society.

Many oars have I had – lo! These cups are a token –
Since first a raw Freshman I splashed in a crew;
Their shafts may be warped and their blades may be broken,
But their staunchness lived on to be centered in you.
Lo! All these old oars that I lost with or won with
Return to remind me of failure or fame.
The traditions are yours of those blades I have done with;
The wood may have changed, but the soul is the same. 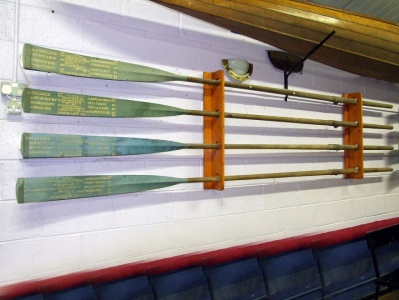 Four of the seven McClintock-Bunbury oars on display in Carlow Rowing Club.

Eton’s best-known holiday takes place on the so called ‘Fourth of June’, a celebration of the birthday of King George III. The day is celebrated with the Procession of Boats, in which the top rowing crews from the top four years row past in vintage wooden rowing boats. The ‘Fourth of June’ is no longer celebrated on 4 June, but on the Wednesday before the first weekend of June. The first boat in the procession is the ten-oar Monarch. This is followed by the rest of the fleet in the following order and seniority of crew; Victory, Prince of Wales, Britannia, Thetis, Hibernia, St. George, Alexandra, Defiance and finally Dreadnought. There are two excellent articles by Tim Koch on the procession on HTBS. The entry dated the 11 May 2010  is called Etonians and their Boaters and that on the 5 June 2011 is called Tim Koch on the 2011 Eton’s Procession of Boats. 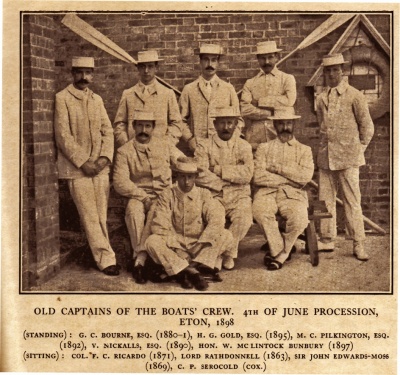 The above photograph originally appeared in Vivian Nickalls’ autobiography Oars, Wars and Horses which was published in 1932. It reappeared on page 50 in Peter Mallory’s epic 2,500 page The Sport of Rowing in 2011. Colonel F. C. Ricardo is seated left, beside him, Tom Bunbury (Lord Rathdonnell) is seated center, being the elder “Captain” with his son Billy standing on the right. Unfortunately, there appears to be two errors in the caption both of which relate to the Bunburys. The Eton Registers published in 1901 and 1906 list Tom as Captain of the Boats in 1868 (not 1863) and J. L. Philips as Captain of the Boats in 1897 and not Billy. It is still a wonderful picture and I am very grateful to Peter for the scan of the photograph.