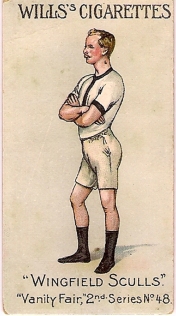 With three entries about this year’s Wingfield Sculls, 29 October, 4 November and 7 November, let’s round up this rowing event by posting a cigarette card from 1902: Wills’s Cigarettes “Wingfield Sculls” “Vanity Fair, 2nd Series No. 48”. Easily recognised on this card is the famous oarsman, Guy Nickalls (1866-1935). He had won the Wingfields in 1887, 1888, 1889 and 1891 – and to this can be added twenty-two won events at Henley and an Olympic gold medal in the eights in 1908. The special pose shows how Nickalls was depicted by SPY in the magazine Vanity Fair in 1889.

While there is a lot of sportsmen (and others) from Vanity Fair shown on Wills’s Cigarette, I am not sure how many of the sixty oarsmen who was published in Vanity Fair actually made it to a these particular cigarette cards.