Those HTBS readers who have been around for a while might remember that I have a weak spot for ‘neckwear’: ties, bow ties, day cravats, you name it. Early on this summer, I received a nice e-mail from Madeleine Johnson, an American lady who lives in Milan, Italy. She was wondering if she might use images of two old cigarette cards that I had posted in one of my blog posts ‘Notes from a Rowing Tie Snob’ on her own website. Of course, I said yes, being happy to accommodate someone who was interested in ties, and, I would like to add, had a grandfather who was a Swede in Minnesota. 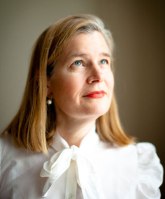 Madeleine request was not simply to satisfy her interest, no it was more than that, she has founded a company to make fancy hand-made knitted rowing ties! It all started when she wanted to present a gift to the Groton School’s varsity crew where her son is rowing. As it happens, Groton (in Massachusetts) has a rowing coach who is famous, Andy Anderson. Although, a splendid coach for the school, Andy is probably more ‘famous’ or known as ‘Dr. Rowing’, a columnist for the magazine Rowing News. ‘Andy has been a huge help in my little business’, Madeleine writes in her e-mail. He, for example, wrote about Madeleine’s company Old College Ties. If you have missed Andy’s, ‘Dr. Rowing’ piece, try to track down the April issue of this year of Rowing News – a most entertaining article. 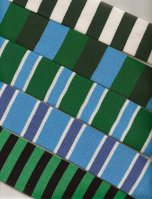 But back to Madeleine’s ties. She writes to HTBS: ‘They are handmade in a historic factory here in Milan where I live. The factory makes ties for brands such as Gucci and Ralph Lauren, so the quality is high and the ties can be worn for style as well as spirit. The minimum order is 20 and they can be made in silk, cotton or cashmere and wool. The price ranges from $30 for cotton ties to $45 for silk. For an extra charge, we also do a nice commemorative label with the club’s name.’

Madeleine’s ties made their debut at Henley Royal Regatta this summer as Brunswick School (in Connecticut) varsity boat was wearing them, and so were Groton and Tabor Academy, the latter also from Massachusetts. 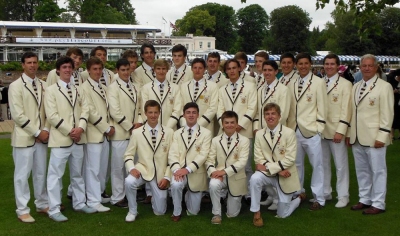 The questions are now – how is HTBS going to round up 20 people, and which should be HTBS’s colours on its tie?