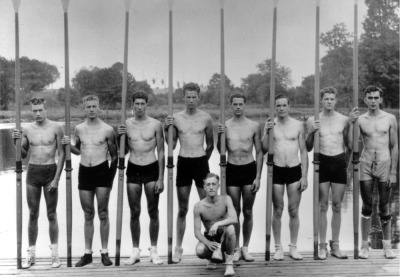 Now when it’s time for the Olympic Games again, even those magazines which never otherwise publish articles on rowing – mainly because they do not know the difference between a paddle and an oar, stroke side from bow side – have decided that they really must show their diversity and publish something about boats. Maybe therefore, the internet magazine Slate published a rowing history article the other day, “Six Minutes in Berlin” about the ‘Huskie’ oarsmen who competed at the 1936 Berlin Games and took a gold medal, while “Hitler, Hermann Göring, and other Nazi officials, awaited another German victory”.

The author of the piece, Michael J. Socolow, an associate professor in the Department of Communication and Journalism at the University of Maine, has done a good job, though I cannot agree that it’s “the story of the greatest Olympic race you’ve never heard of”. It is mentioned that this article is an excerpt from his upcoming book Six Minutes in Berlin.

If you have been reading HTBS for some time, you have heard and read about it on this site already. On 15 March, 2011, HTBS’s Tim Koch wrote about the young men and their amazing story when the news broke that a book and a film about the Huskie crew might be on the horizon. Read Tim’s piece here.

As a matter of fact this was not the only article about ‘rowboats’ that Slate published recently. After the British television film Going for Gold (Bert and Dickie in the U.K.), June Thomas wrote a review on the film. Read it here. For those of you who missed rowing historian Chris Dodd’s review, which was published already in May. Read Dodd’s review here (via link).