In yesterday’s post on HTBS we referred to rowing historian Bill Miller’s great website Friends of Rowing History. Today, we are actually going back to Bill’s site, now to have a look at a newly published list, which for sure will interest those of you who like ‘vintage rowing video clips’. Bill has put together a wonderful list of rowing films from British Pathé. You can easily browse the following categories: US People/Events; Henley Royal Regatta; Women’s Rowing; International Racing; Equipment; Eton-Oxford-Cambridge; Doggett’s Coat & Badge Race; and Misc. Clips. 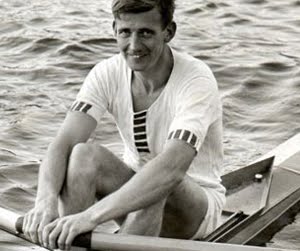 Below you will find two film clips from British Pathé that I picked specially for this entry, both dealing with the 1953 European Rowing Championships in Copenhagen, which were held on 14-16 August. Well, it says ‘Copenhagen’ – do not get fooled by the statue Den Lille Havfrue [The Little Mermaid] in the beginning of the first film – but the rowing championships were held 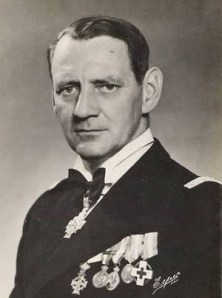 outside of Copenhagen at the Gladsaxe rowing stadium at Lake Bagsværd. Among the spectators is King of Frederik IX of Denmark, himself an avid oarsman as a young prince. Among the oarsmen you see the English sculling champion Tony Fox (above), who had taken a silver medal in the single at the European Championships in 1951, a fourth place in the Olympic final in 1952, but on Bagsværd he never made it to the final. The gentleman in spectacles handing out the medals is the FISA president Gaston Müllegg. When the Danish coxless four won, King Frederik went down to the landing stage to congratulate his countrymen.

This second film about the Championships is showing footage not used:

Here is a list of the countries taking the medals at the 1953 European Rowing Championships:

There was an interesting event happening during these 1953 Championships. Before the men’s eliminating heats a women’s international regatta was held with female rowers from nine countries: Austria, Denmark, Finland, France, Germany, Great Britain, the Netherlands, Norway, and Poland. The following year, the first European Championships were held for women on the Bosbaan course in Amsterdam, on 20-22 August, 1954, while the men’s races where held on the same course on 27-29 August.