Tim Koch On The Scullers Head And An Interesting Sign… 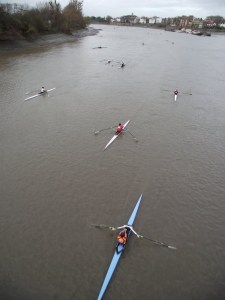 The 58th Vesta Scullers Head of the River Race was held on Saturday 3 December over the 4.25 mile championship course from Mortlake to Putney in London. It claims to be ‘…the largest single-division processional single sculls race in the world’. First held in 1954, this year’s race involved 500 scullers and attracted entries from the United Kingdom and abroad, with standards ranging from internationals to novices. The conditions were good and some fine racing was had. The results are here.

Those who followed my recent report on the Wingfield Sculls will notice that first place in both events went to Adam Freeman-Pask of Imperial College. He beat Wingfields opponent Henry Pelly by just over a second, even after he received an unspecified time penalty for ‘unsportsmanlike behaviour’.

While standing on Hammersmith Bridge to take photographs of the scullers, I reread a charming enamel sign dating from 1914 that I had seen many times before. It lists the ‘Thames And Other Bridges By-Laws’. A by-law is a local law passed under the authority of a higher body, in the United States they are called ‘ordinances’. The ‘higher authority’ that confirmed these particular laws was ‘R McKenna, One of His Majesty’s Principal Secretaries of State. Whitehall, 28th May 1914’. The significance of this to rowing geeks is that Reginald McKenna (1863-1943) was a member of the Trinity Hall (Cambridge) eight that won the Grand Challenge Cup at Henley in 1886 and the four that won the Stewards’ Challenge Cup in 1887. Trinity Hall also won the Grand, Thames, Ladies’ and Visitors’ in ‘87. Also in that year, R McKenna was at bow in the winning Cambridge crew in the University Boat Race. Having Steve Fairbairn as a coach probably helped in these achievements but McKenna was clever enough to work some things out for himself. ‘Wat Bradford’, the author of the Wikibook, The Rowers of Vanity Fair states:

“In securing the 1887 victories, the club history (H. Bond: A History of the Trinity Hall Boat Club; 1930) credits McKenna with teaching the crews to use long slides, as de Havilland would do at Eton several years later:

‘[McKenna] thought out the whole theory of rowing afresh for himself, being helped not a little by his knowledge of physics. Sooner than anyone at the Hall he realised that the Jesus crews were on the right lines in adopting the long 15-inch slide… the official style at the Hall, with a succession of Etonian captains, was still the Etonian short slide with the emphasis on “beginning” and body swing, and it was not till ‘86 that the long slide won its way into general use.’”

In his political life, McKenna served in two of the three highest offices of state. He was Home Secretary (Attorney General) from 1911 to 1915 and Chancellor of the Exchequer (Secretary of the Treasury) from 1915 to 1916. After the 1914-1918 War, McKenna left politics and became the Chairman of Midland Bank. In this role he made the following observation:

“I am afraid the ordinary citizen will not like to be told that the banks can and do create money. And they who control the credit of the nation direct the policy of Governments and hold in the hollow of their hand the destiny of the people.”

This is frighteningly relevant to the current ‘credit crisis’. It seems that the man understood rowing and money.