2011 Wingfield Sculls with Adam Freeman-Pask in the lead, Tom Solesbury on the left, and Henry Pelly closes to the camera.

The 171st Wingfield Sculls – The British Amateur Sculling Championship and Championship of the Thames – took place on Thursday, 27 October 2011, as reported earlier on HTBS by Tim Koch. With great weather conditions it looked as it would be an open affair in the men’s race, especially as last year’s champion, Alan Campbell (winner also in 2006 and 2009), had withdrawn due to injury. It was left to Adam Freeman-Pask of Imperial College, Henry Pelly of London RC, and Tom Solesbury of Leander to fight it out on the Thames. In the end it was Freeman-Park who crossed the finish line first in a new record time, at 19 min. 21 sec.

As Rosamund Bradbury withdrew in the women’s race, it became a match between Anna Watkins of Leander, who won last year, and Beth Rodford of Gloucester. Watkins took an early lead, and did not have a problem finishing the race in a new record time at 20 min. 55 sec., beating the old record by almost a minute. 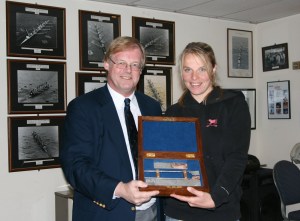 While Tim was one of the first to write a report about the 2011 Wingfields, HTBS is also proud to present Tim’s film from this year’s two races. Enjoy!!!

(Special thanks to Dr Robert Treharne Jones, press officer at Leander Club, for allowing HTBS to publish his photographs.)