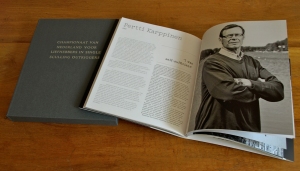 While many good books have been written about the history of rowing: the rowers, scullers, rowing clubs, the World Championships and the Olympic rowing events, etc., very few books have been published about a special regatta; of course, with the famous exceptions being the Oxford and Cambridge Boat Race, the Yale-Harvard Regatta, and Henley Royal Regatta.

Earlier this year, however, a gorgeous book was released in the Netherlands about one of Europe’s most prestigious rowing regattas, “the Championships of the Netherlands for Gentlemen Amateurs in Single Scull Outrigger”, or as it is also known, Holland Beker, which was sculled for the first time in 1886. The Ladies’ Trophy was added in 1988. To celebrate this regatta’s 125 years, the Regatta Association decided to publish Holland Beker to be handed out to the competitors, but also to be used in the next few years “to recruit athletes to compete at the regatta in Amsterdam”, Johan ten Berg, editor of the book, writes in an e-mail. Editor ten Berg has had several contributors writing the interesting history of the Holland Beker, which not only reflects on Dutch rowing, but also European rowing as well. 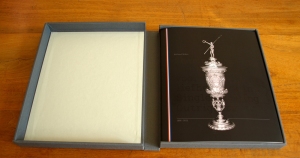 As an old book editor, let me tell you what a pleasure it is to read and flip through the pages of this beautiful book, whose pages have two columns with the text both in Dutch and English. The book, which has a slip case, has wonderful photographs in black&white (and some “hidden” pictures in colour), but also fold-outs and facsimiles of letters, maps, and documents, which proves that the group behind this publication has, indeed, done everything aesthetically possible to produce a marvellous printed work that can raise awareness among the top elite rowers in the world, that the Holland Beker is open for everyone; and, at the same time, give the rowing history buffs their adrenaline to run faster… 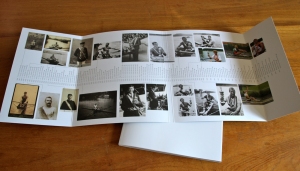 Yes, the big scoop in this book is the interview with the legendary Pertti Karppinen, who has not been interviewed ever before outside his home country, due to language problems (not Karppinen’s, but the interviewers, who did not speak Finnish). In an e-mail the good fellow Johan ten Berg reveals that the book production group invited Karppinen to Amsterdam during spring, and he was accompanied by his daughter, who is studying in the USA, and who acted as translator.

In the interview with the “Gentle Finn”, he says that he kept records in note books of all his practice sessions through the years, a year in Karppinen’s case being between Easter to late November when there was no ice on his training waters, nor was it too dark to row. Karppinen also tells stories of his never ending battles against Kolbe. I distinctly remember seeing Karppinen at regattas in Sweden and Denmark, for example at the Nordic Rowing Championships, where he just seemed to be invincible; an untouchable sculling Legend and God. 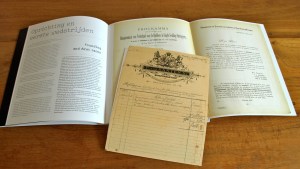 The other eight interviews are also very interesting – Tjerk van Weezel has really done a stupendous work – as the scullers not only tell about the racing at Holland Beker, but their training and philosophy behind competing at the (old) European Championships, and the Worlds, and the Olympics. 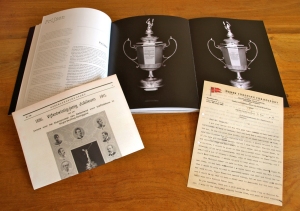 Coming from Scandinavia, I found it extremely interesting and thrilling to see a facsimile letter from Axel Lindqvist of Dansk Forening For Rosport, the Danish Rowing Association, written in November 1945, assuring one of the organisers of Holland Beker, a Mr. Jongejan, that the cup had been in safe hands during the Second World War, as the Danish title holder, Viggo Olsen, who won it in 1939, had had the cup locked up in a bank safe in his home town of Sorø, outside of Copenhagen. The letter becomes a document of its time, when Mr. Lindqvist writes to his Dutch friend asking if he has received a packet, probably with food. Lindqvist offers to send more packets, but would first like to make sure that the first one has arrived. That you had to be careful for certain reasons after the War is made clear when the Dane writes:

“And my friend Weber. If he is alive, I should be glad to send him a packet also. That is, you understand, if he isn’t blacklisted. One has to be careful in these times, you see. I had a lot of friends i[n] Norway, some of them stuck to Quisling, and I don’t know them more.”

Lindqvist, who before the War had worked for the Ministry of Finance, writes that he has been made head of a special Danish government investigation bureau which is “blacklisting the Quislings” in Denmark. 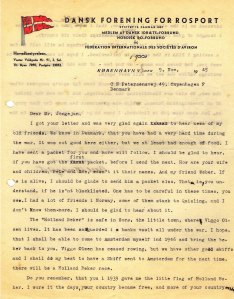 (Click on the image of the letter to enlarge it)

The Holland Beker is, indeed, a grand book which tells the great story of a valuable and significant European regatta. John ten Berg mentions in an e-mail that the book is actually not for sale, as it is used as a hand-out to the participating scullers, but, with Chairman of the Holland Beker Regatta Association Nico Rienks’s blessing, the HTBS readers can order copies by e-mailing the regatta secretary at secretarishbwv@hollandbeker.nl

The book costs €35 (Euros), and the postage, of course, varies depending on where you want the book to be shipped, and via air or surface. Indeed, a marvellous book it is!