HTBS’s Tim Koch writes from London: The BBC Radio station that covers the county of Shropshire recently ran a story about three -generations of the Lapage family and their involvement with rowing. Read it here.

Grandfather Michael, aged 87, won a silver rowing for Britain in the  eights at the 1948 Olympic Regatta held at Henley. He and his family had never seen film of the  event so the BBC tracked down an old newsreel and put it onto YouTube for them. You can watch it here….

The 1948 Games were known as the ‘Austerity Olympics’ as they were held only three years after the  end of the 1939-1945 War when conditions in Britain were in many ways worse than during the  conflict. The country was nearly bankrupt and everything had to go for export. Michael told the BBC  that this was one reason that the well-fed Americans beat them: “They had more meat then we did. We were still on rations.”

This may have had something to do with it but, looking at the footage, the confident low rating start of the US team suggests that they were in control of the race from the beginning.   The British rowers were not exactly over cosseted. They did not have the sides of Texan beef that  the Americans brought over with them, but they did have their butter ration doubled from two to four  ounces (60 grams to 120 grams) a week. They had to supply their own kit but they were given a scarf,  a blazer badge, and a pair of underpants. ‘Austerity’ seems an understatement!

Lapage’s crew was essentially the 1948 Cambridge Boat Race crew. They had set a new course record,  breaking the eighteen-minute barrier for the first time on the Putney to Mortlake race. The practice  of sending the currently most successful club crew to represent Britain at the Olympics continued  until the 1972 Games when something resembling a ‘national squad’ was established. 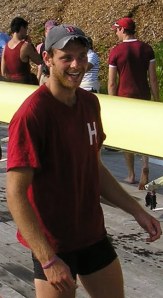 Michael’s son, Philip, is a rowing coach at Shrewsbury School and his sons, Sam and Patrick, aim to  row at the 2016 Olympic Regatta. Sam, who is still at school, recently rowed at the ‘Coupe de la  Jeunesse’ (the Junior European Rowing Championships) while older brother Patrick, 21 (on the right), stroked the GB  men’s eight to third place at the 2011 Under-23 World Championships. He also came third in the coxed  four in the 2010 Under-23s. Patrick is currently a Junior (Third Year) at Harvard where he strokes t he Varsity Eight. He won the Ladies Plate at Henley in 2010 with the Crimsons. His impressive  Harvard Crew record is here.

I suspect we will hear a lot about the rowing Lapages in the future  and that more underpants will be coming their way.