A Day With The Uppers

These Queen’s Men are in a ‘ram dam’. Bow and stroke are rowing, number two is sculling.

HTBS’s Tim Koch attended what must be regarded as a very British event, ‘Swan Upping’. Here is his report:

‘Swan Upping’ dates from perhaps the 12th century and occurs annually over five days towards the end of July when mute swans between Sunbury and Abingdon on the River Thames are checked, marked and counted. In the best traditions of strange British events, it is an ancient activity whose purpose has changed over the years, it involves a certain amount of dressing up and drinking alcohol and it has both practical and ceremonial aspects.

The rowing connections to Swan Upping are two-fold. The Uppers work from six Thames Skiffs and they are mostly apprenticed served watermen, licensed to work the river. Some of them are also Doggettt’s winners.

Historically it was desirable to own swans because the young birds (cygnets) were considered good to eat on special occasions. The King or Queen was entitled to claim ownership of any unmarked swans in open water. Today swans are no longer eaten and only three bodies have maintained their right to own the birds. These are the Crown (the King or Queen) and two Livery Companies, the Vintners and the Dyers. Livery Companies are descended from medieval guilds who regulated their trades, the wine trade in the case of the Vintners and the cloth dying trade in the case of the Dyers.

The event is run by the Queen’s Swan Marker, presently David Barber, a man clearly genuinely passionate about swan conservation. He wears a scarlet jacket with gold trim. These days he is supported by the Queen’s Swan Warden, presently Professor Chris Perrins, an ornithologist from Oxford University. The Royal Swan Uppers wear red Guernsey sweaters embroidered with the Queen’s cipher. The Vintners’ Swan Marker is presently Martin Spencer, a Doggett’s winner, and his men wear white Guernseys, and the Dyers’ Swan Marker is currently David Reed and his men wear blue Guernseys. Each boat flies appropriate flags and pennants.

The day begins with a small glass of port and a toast to Her Majesty the Queen, the ‘Seigneur (Lord) of the Swans.’ 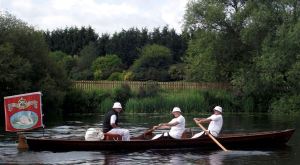 One of the Vintners’ skiffs, coxed by Bob Prentice, Doggett’s and Henley winner.

When a groups of swans with young are found, the cry of ‘All-Up’ is given and the boats surround the brood. They are taken ashore, data is collected, each bird’s health is checked, they are weighed and cygnets whose parents carry the rings of one of the livery companies are given the same rings. Royal birds are not marked. At some spots local schoolchildren are invited to watch and ask questions. Education and conservation are important modern aspects of this ancient activity.

Here is a nice video of a recent Upping:

In 2009 the Queen was the first Monarch in hundreds of years to witness Swan Upping taking place. A news report on this event is shown here:

In the first 15 seconds and then from 42 seconds a ‘ram dam’ is shown, this is a skiff that has bow and stroke rowing (one large oar held with both hands) while number two, in the middle, is sculling (two small oars, one held in each hand). Could a HTBS reader explain the logic of such an arrangement? 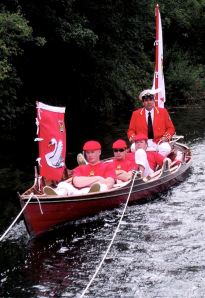 Some of the Queen’s Swan Uppers relaxing under tow.

There is some cheating involved in covering 79 miles of river in five days with frequent stops to wrestle large angry birds. The skiffs are towed behind motor launches for some of the way. These are supplied and driven by members of the Thames Vintage Boat Club who are a very hospitable crowd. The final craft in this flotilla is the press launch which is one of Henley Royal Regatta’s umpires’ launches.

The two Vintners’ skiffs under tow. The tow boats must be members of the Thames Vintage Boat Society. 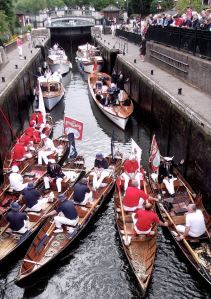 I had a splendid day on the Thames with the Uppers. My thanks to the many people who looked after me: Martin Spencer (Doggett’s 1970), Bob Coleman (Doggett’s 1996), Paul Willmott (Press Officer), Caterina Little (Buckingham Palace Press Office), Carolyn and Brian (thanks for the ride and the wine) and Sean and Paul (thanks for the ride and the beer).

The only question that remains unanswered is – what does swan taste like? 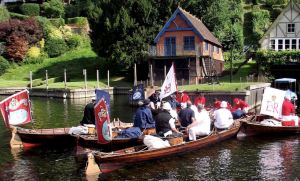 ‘All up’ A brood of swans are penned in by the skiffs. 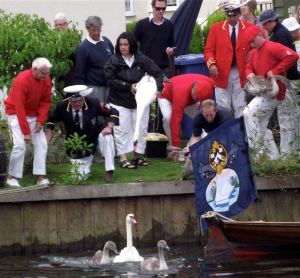 The swans are put back after marking. The lady in the centre is from the Shepperton Swan Sanctuary, the man behind her and to her right is the Queen’s Swan Warden, Professor Chris Perrins.