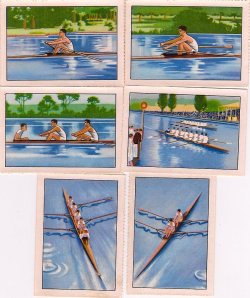 As I wrote in yesterday’s entry, I won a set of Nestle’s Rowing Cards of 1938 on eBay two weeks ago. Above you will see the rest of the cards in the set. While the one’s from yesterday showed the difference between the Fairbairn ‘style’ and the ‘old’ English orthodox style, these cards show the different boat types: single scull; coxed pair; eight; coxed four; and double scull. It might actually be ‘orthodox v. Fairbairn’ that is shown in the two cards on top. Steve Fairbairn, who was the coach who more or less came up with ‘Fairbairnism’, never regarded his method of rowing as a ‘style’.

It might interest the readers of HTBS, that Nestle also published a set of rowing cards in 1937.