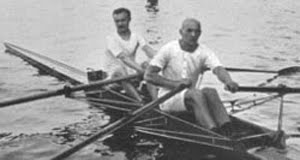 In my little library of rowing books you will not only find works in English. A real gem is a thin book by Dr. Bernhard von Gaza (1881-1917), who was German champion in the single in 1907 and 1911, and in the double (with Carl Ekkehard Ernest) in 1907, 1908, and 1913 (pic. on the right). The latter year, the two oarsmen of RG Wiking Berlin also became bronze medallists in the European Championships. In 1908, von Gaza also took a bronze medal in the single scull in the Olympic Regatta in Henley-on-Thames.

It was the year before the Olympic Games were held, in 1907, he published Rudersport (Skullen und Training), book No. 17 in the series “Miniatur-Bibliothek für Sport und Spiel”. In the same series, von Gaza published Wanderfahrten im Rudder- und Paddelboot, book No. 49, and Rudersport (Riemenrudern und Training), book No. 59, which is the book I have. There is no printing year in the book, but his Foreword is written in 1914. I do believe, however, that my edition is of a later date.

Bernhard von Gaza shows in his little book that he has read some of the English ‘how-to-row’ books as he is quoting both W.B. Woodgate and R.C. Lehmann. The German rower and writer does bring up something in his chapter “Des Sportsmanns Lebensregeln” that none of the mentioned English oarsmen and writers do in their books, and, which must be added, is very daring to write at this time period. He writes:

I am not sure if I would agree with von Gaza on this ‘rule of a sportsman’, but you have to agree that it’s a bold statement to have been written in 1914. Bernhard von Gaza probably died due to World War I, as I know he died in Belgium.