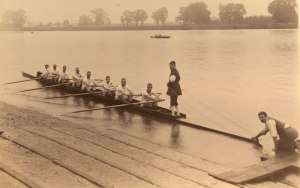 In HTBS correspondent Tim Koch excellent report on the Wingfield Sculls (see entry on 26 August, “Anna and Alan Take the 2010 Wingfields”) he writes, “One of the idiosyncrasies of the Wingfields is that the competitors can legally be ‘steered’ by signals from following boats. Until at least the 1920s this was done by the bowmen of following eights, not rowing and facing the wrong way.”

As this might be a little confusing for some readers, allow me to give you an example, a photograph from the 1898 Wingfields, when Harry Blackstaffe (Vesta RC) met the upcoming sculler Hunting Howell (Trinity Hall, Cambridge). A few weeks earlier, young Howell (in articles and reports always referred to as ‘B.H. Howell’) had easily over-come Blackstaffe in the Diamonds Sculls at Henley. Although, Howell also beat the sculler from Vesta RC in the Wingfields that year, it was not with the same ease.

The interesting photograph on top, which is from Hunting Howell’s private photo album, now kept in The National Rowing Foundation’s archives at Mystic Seaport Museum in Connecticut, shows Howell’s ‘pilot boat’: seven oarsmen, one Doggett winner coxswain, and the ‘pilot’ in the bow seat, facing forward. In a couple of minutes he is going to steer Howell over the Championship Course from Putney to Mortlake.

(I am hoping to have an article published in Rowing & Regatta later this autumn about Hunting Howell, who was from New York. He took up rowing and sculling when he was studying at Trinity Hall, Cambridge in the late 1890s.)