Guest writer Anthony is here giving the HTBS readers a real treat. Tony went on a marathon row in a ‘church boat’ earlier this month at the town of Sulkava in Finland. Here is his report! 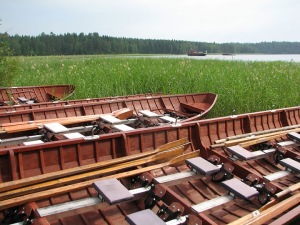 Summer in many nations is a time of pilgrimage, and in a somewhat modest way the same can be said for Finland. At least judging by the absence of shoppers in the malls or the lack of jams on the Helsinki ring roads, vast numbers have escaped the cities. It’s obvious that summer cabins are the greatest attraction for most families, and concert venues for most young singles. But from July 8 to11 in Sulkava near Finland’s eastern border round 7,000 rowers take to the water in a festival of wooden boats. Along with the Finnish hobby of wife-carrying racing, this is the largest participatory sports event that the country has to offer during the summer months, and the greatest number of those involved were in traditional 14-oared, 12 meter long, wooden ‘churchboats’.

As you might expect these used to have a highly utilitarian purpose: getting people from outlying homesteads back behind the forestline to church, in those quieter days before paved roads and carriages, let alone engines or speedboats. Known in Canada as ‘Viking boats’ with their traditional, sleek wooden lines, the craft could be over 20 meters long and were built almost exclusively of pine, clinker style with six strakes. They were constructed and rowed locally, involving both men and women at the oars, with the largest known to have had 60 rowers.

Whereas in days gone by the outward journey would be conducted in quietness or with only sacred singing, the return trip was an opportunity for locals’ racing spirit, with men even doffing their dark hats and jackets in an atmosphere that was anything but reverential. This is the more spirit which survives in the mass races held in Sulkava. Men and women of all shapes and physiques and from all parts of the country pit themselves against their own physical limits and 60 or 70 kms of lake. The fittest racers come from clubs around the country, managing the journey in under 4 hours, having spent the previous winter months training for the event.

Equally important for the health of the sport are the part-time enthusiasts who join the ‘marathon class’. This course is slightly longer and is spread over the whole weekend, with a night under canvas for most participants. It involves little or no specific training, but an equal determination to get to the end of the course in as best style as possible. The crews are often formed of work colleagues, throwing together folks of different wits, aptitudes, let alone sexes. My boat comprised 15 varied souls, the youngest in his late teens, the oldest nearly 70, and after completing the course with experience of previous marathons between 1 and 31 years. In contrast to the disciplined racing boats, there was a constant barrage of banter between these rowers, occasionally moderated by the cox who had a very hands-off attitude. His most important role, other than steering obviously, was to ensure that all crew members stopped to drink, 2 at a time at regular intervals. Longer breaks were spent at the refreshment stations provided, but equally important given the searing temperatures this year were the frequent stops to stretch legs, immerse over-heated bodies, as well as to replenish nicotine levels! This indeed is rowing for pleasure.

Tony, many thanks for a great report!