New Edition Of ‘The Long Ships’

At last, the new edition of The Long Ships by Frans G. Bengtsson is out here in the States.

Bengtsson is my favorite Swedish author, and he was a true man of letters; he wrote poems (sonnets as a matter of fact), essays, book reviews, a biography about the Swedish warrior king Charles the XII, and the two-volume novel The Long Ships, which is about the Viking Röde Orm, or as he is called in the English edition, Red Orm. For anyone interested in this book, its author, and its English translator, Michael Meyer, who performed a brilliant translation (trust me, I have read them both, over and over again…), might like to take a look at an entry I posted on 3 May 2009, ‘A Rowing Room With A View’. It sheds some light on my all-time favorite book, which has some rowing in it, too. 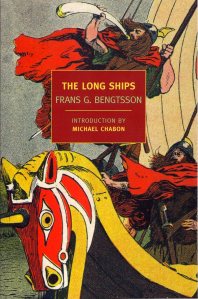 What is really ‘new’ with this edition, which is published by New York Review Books, is an introduction by Michael Chabon, an author who lives in California. I have to confess that I have not read any of his books, but I am thrilled about what he writes in his introduction. Chabon writes that The Long Ships “stands ready, given the chance, to bring lasting pleasure to every single human being on the face of the earth.” Furthermore, he compares Bengtsson, with all rights, to great authors like Dickens, Stendhal, Tolstoy, and Dumas. Chabon continues to state that the reader of this novel comes to regard its author, “as we come to regard any reliable, capable, and congenial companion in the course of any great novel, adventure, or novel of adventure – as a friend for life.” Is that not beautifully written? I am also happy to read Chabon’s worthy tribute to Michael Meyer for his elegant work with the translation, which actually Bengtsson assisted him with.

While Michael Chabon’s introduction is superb, I have found some minor ‘errors’ in this edition. First of all, the cover is dreadful! Why on earth are there ‘wings’ on the helmets the Vikings are wearing (‘wings’ are not better than ‘horns’, the latter a terrible historical inaccuracy), and why is there a painted horse or unicorn head in the bow of the Viking boat? Moreover, in the presentation of Bengtsson in the beginning of the book it states that both the British and the American editions of The Long Ships were published in 1955, which is wrong. They were both published in 1954; Bengtsson was able to see these editions before he died in December 1954.

As a matter of fact, I would have handed out some good extra points, if the very first edition in English was mentioned. In 1943, the American publisher Scribner came out with the first volume, with the ‘American’ title Red Orm. For some unknown reason, the second volume was never even considered by Scribner – their loss!

Other ‘errors’ in the presentation of Bengtsson are the Swedish titles of The Long Ships. Here mentioned are Roede Orm, sjofarare i vaesterled and Roede Orm, hemma och i oesterled. The correct titles are Röde Orm, sjöfarare i västerled och Röde Orm, hemma och i österled – nothing else. It is quiet common, on this side of the pond, to disregard the three extra letters at the end of the Swedish alphabet; after the letter ‘z’ follow the letters ‘å’, ‘ä’ and ‘ö’. Although it might look as an ‘a’ with a circle or two dots, or an ‘o’ with two dots, the circle and the dots are a part of these letters, and not just merely an ‘umlaut’, though the Swedish language does have these sound changes, too, like man [Eng. man] to män [Eng. men].

However, do not let these minor errors stop you from immediately buying Frans G Bengtsson’s The Long Ships. You will not be disappointed, I promise…