‘Tarka’ – The First Sir Of Rowing

Sir Steven Redgrave was not the first person to be knighted for services to rowing. He was actually the second oarsman. The first one was one of my ‘rowing heroes’: Sir Harcourt Gilbey Gold (1876-1952). Harcourt Gold, known by the English rowing world as ‘Tarka’ (it seems at an early age he had a problem pronouncing his first name, which came out as ‘Tarka’- a name that stuck), was a master of whatever he decided to accomplish in rowing.

Tarka, who was called by R.C Lehmann, “one […] of really great strokes” in his Rowing (1897), stroked three Eton eights to victory in the Ladies Plate in 1893-1895, and Leander in the Grand 1896, 1898-1899. He won the Stewards twice (for Leander in 1898 and Magdalen in 1899), and stroked Oxford in The Boat Race at four occasions, in 1896-1899, only losing the last year. In his first Boat Race, in very rough water, Oxford was behind almost at the first stroke. With 200 yards to go, the dark blues managed to squeeze past Cambridge, winning with a 2/5 length. A contemporary source wrote about Tarka, among other things, “He has wonderful knees; and his legs are always loudly appreciated by the crowd at Putney.” You can study his legs in the drawing by SPY, published on 23 March 1899, in Vanity Fair up on the right.

After his active rowing career was over, Tarka began a successful coaching career. He coached Magdalen and Oxford for many years, and he coached two Leander eights to Olympic gold in 1908 and 1912. During the First World War he served in the Royal Flying Corps. In 1909, he had become a Steward at Henley, and after the war, in 1919, he was elected to the regatta’s management where he oversaw the making of the Stewards’ Enclosure. The next year, Tarka published his little pamphlet The Common Sense of Coaching* (1920). 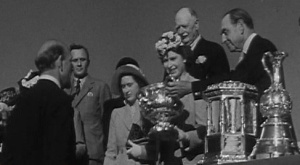 After the Second World War, in 1945, he was elected Chairman of the Henley Royal Regatta, and three years later Chairman of the Amateur Rowing Association, ARA. In 1949, he received the first knighthood for services to rowing. At the first Henley regatta after the war, in 1946, Tarka had the great pleasure to welcome and escort princesses Elizabeth and Margaret. In the following newsreel, he can be seen with the princesses at this occasion, when the coming Elizabeth II, was handing out the prizes to the winning crews.

What is maybe even more interesting is the following newsreel that is showing the unused, cut material that did not make it into the newsreel above. Here, for example, you will see a few seconds of the Diamonds final when Jean Sepheriades beat Jack ‘Kell’ Kelly.

Tim Koch has sent me an old Rowing article from the beginning of the 1950s by Hylton Cleaver. In the article, Cleaver wrote about Tarka’s family history where his mother, Charlotte, came from the famous Gilbey gin dynasty. He married Helen Maclagan, sister of the 1899 Oxford cox, G.S. Maclagan. Tarka’s elder sister, Ellen, married legendary ‘oar’ Guy Nickalls and their rowing son ‘Gully’ had Tarka as his godfather and married his daughter Rachel. Gully succeeded his uncle, Tarka, as Chairman of the ARA. (I think I got that all right…) – My thanks to Tim!

* If anyone has The Common Sense of Coaching for sale, I would be very happy to buy it!