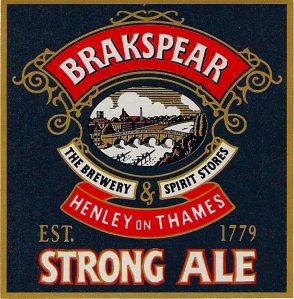 For a few years, starting in the beginning of the 1990s, and not understanding better, I collected material to compile a rowing encyclopedia from mostly a Swedish point of view. Interested in all kinds of aspects of rowing, I assembled everything that I could find about moving a watercraft with an oar or some sculls. So, not only was I fascinated with the sport of rowing, I wanted to cover every culture part of it, too. I contacted a lot of different institutions to get information.

The other day, among my rowing stuff, I happened to find an envelope from W.H. Brakspear & Sons PLC, the brewery in Henley-on-Thames. It was sent in April 1995 and contained a label for one of their products, Brakspear Strong Ale, or Henley Strong Ale, as it was also called. It was launched in 1989, first in cans, and then later also in bottles. The label, which you see on the left, has a nice scene overlooking the bridge in Henley and, of course, some boats on the river. Lovely picture for a beer, and it was not bad at all because I did try it when I went to Henley during the 1990s. Early in the 2000s, the Brakspear brewery part of the company was sold off to another brewery.

Talking about drinking, in the mid- and late 1800s, the liqueur Punsch (not to be confused with punch served with fruit in a bowl) was very popular in Sweden. The Swedish Punsch, which is a product from arrack, sugar, water, and other flavours, is still sold these days, and well-liked among students, especially at the universities in Lund and Uppsala where drinking Punsch at academic festivities go with singing songs to celebrate this noble drink. It can be served well-chilled, or hot, the latter together with Swedish pea soup. Whether you drink it hot or cold, it is likely that you will end up with a severe and long-lasting headache. One of the brands of Punsch during the late 1800s was Sports Punsch, which on the label had sailing, horse racing, and a coxed outrigger four. My wife, who has tried Punsch once, thinks it is ‘dreadful stuff.’