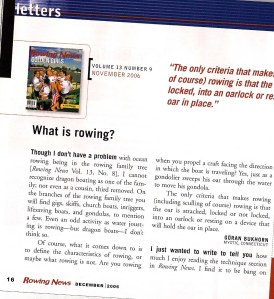 Exactly three years ago, in October 2006, the magazine Rowing News published an article about “rowing cousins” – other water activities in the rowing family tree, as it was called. What was featured was Ocean rowing and Dragon Boat racing. On the whole, I am a very understanding fellow, but I have to confess that I had a hard time accepting Dragon Boat racing as one sport in the rowing family tree.

This began already when I was rowing in Sweden, and the local newspapers mixed up rowing with dragon boat paddling and canoeing. The few times rowing was mentioned in the sport pages, we rowers were either “using paddles in our rowing boats” or “rowing in our kayaks or canoes”. Normally, I would contact the sport editor to explain the difference, and he would always promise that the next time the reporters would write about rowing, they would get it right. Which, of course, very rarely happened. In the next rowing article, we were still in our darn canoes using the blasted paddles.

So, it was not strange that I found myself sitting down to write Chip Davis, the publisher of Rowing News, a letter. It read as follows:

“Though I don’t have a problem with ocean rowing being in the rowing family tree [Rowing News Vol. 13, No. 8], I cannot recognize dragon boating as one of the family; not even a cousin, third removed. On the branches of the rowing family tree you will find gigs, skiffs, church boats, inriggers, life saving boats, and gondolas, to mention a few. Even an odd activity as water jousting is rowing – but dragon boats – I don’t think so.

Of course, what it comes down to is to define the characteristics of rowing, or maybe what rowing is not. Are you rowing when you propel a craft facing the direction in which the boat is traveling? Yes, just as a gondolier sweeps his oar through the water to move his gondola.
The only criteria that makes rowing (including sculling of course) rowing is that the oar is attached, locked or not locked, into an oarlock or resting on a device that will hold the oar in place.”

To my surprise, my little note to The Editor was published in the December issue of Rowing News – with my name misspelled. (No, no, not my typical Swedish first name, but my last name…) Who cares? After living in the USA for more than nine years, very few people can actually pronounce my name correctly. I have stopped being picky about my name – “Mr. Buckhorn” works fine with me! 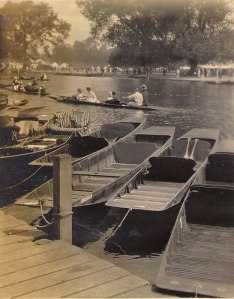 I have never seen any discussion or essay published about the “criteria” for what makes rowing, rowing, which I find odd. The only thing I know is that dragon boat paddling is not rowing. Nor is punting, but this activity has its own rich history, and no one would ever suggest that punting is anything else than… well, punting.