In the early spring of 1990, my good friend Per Ekström and I were appointed editors for the Swedish Rowing Association’s magazine Rodd [Rowing]. A couple of weeks earlier we had carelessly written a letter to the Swedish Rowing Association to offer our services, maybe helping out now and then to write some articles and take a couple of photographs for the magazine. I do not really remember, but we also might have expressed our concerns about the magazine’s decline. Not that we had a lot of experience in this field. Certainly, I had written a few small articles and book reviews for the local newspapers’ culture pages, and even one or two articles on rowing, and Ekström had, on a regular basis, contributions published in an underground, left-wing monthly magazine that in the mid-1980s had gone down the drain.

We received a letter from the Secretary of the Rowing Association where he very politely informed us that as we were so eager to “save” the rowing magazine, we were now in charge of it, and would we be so kind as to inform him where he could send the magazine’s archives with old photographs, unpublished material, etc. At first, of course, we were taken aback by the responsibility of publishing a magazine, especially with our lack of experience, but nevertheless we found the challenge thrilling and plunged head-first into the project as only dim people do who have no idea what they are getting themselves into.

Werner Schmidt, a colleague of mine at the small publishing company where I was an editor, helped us to do a lay-out for our magazine. Thanks to Schmidt’s brilliant eye for book and magazine design, already in the beginning Ekström and I came off with a good, clean, and uncomplicated lay-out. One of the first things we did was to re-name the magazine Svensk Rodd [Swedish Rowing] to show that we started with a clean slate. The title was in a way contradicting the contents, since half of the articles through the years have been about the Boat Race, the Henley Royal Regatta, the Harvard-Yale race, the World Championships, rowing at the Olympic Games, Atlantic rowing, and other international rowing events and news.

The Swedish Rowing Association installed one of their old board members as head of the magazine. This was indeed only an honorary position and as he barely wrote anything for the magazine, Ekström and I decided after a couple of issues to draw straws for which of us was going to be the “Editor-in-Chief” and the “contributing editor”. Ekström lost the draw and was made Editor-in-Chief.

Being interested in history, also rowing history, in the first issue of Svensk Rodd I had an article about the Swedish inrigger-four with coxswain who took a silver medal at the Olympic Games in Stockholm in 1912 and a book review about David Clasper’s Hero of the North (1990), a nowadays very difficult to find soft-cover book about the legendary professional Tyneside rower and boat builder, Harry Clasper.

To keep on writing articles and to fill the space in the forthcoming issues of the magazine, I began buying rowing books, hoping to find good stories to re-tell. I already had a couple of old rowing books in Swedish and a few in English – and, this being before the internet boom – I had to go to different antiquarian book dealers and browse their shelves. One of the first ones I found was W.B. Woodgate’s Boating (1888) in the Badminton Library series, second edition from 1889.

My mother and I had visited my sister in Göteborg, and when it was time to drive back home south, I took the way down town in Göteborg to be able to go by an antiquarian bookshop. I popped in and asked for books on rowing. The owner mumbled something that he might have a copy somewhere and climbed up a tall ladder. He brought down the brown standard trade edition of Woodgate’s Boating from the top shelf, dusted it off and handed it to me. It was in a very nice condition – “very good plus” in antiquarian book dealers’ lingo. Carefully I looked at the price. Based on my measly salary as an editor, it was way above my budget. I thanked the dealer, handed the book back and said sorry it was not within my range. When I came out to my car, my mothe 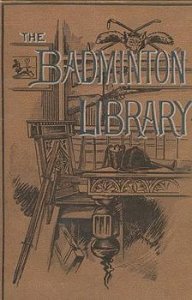 r asked if I had found anything. I told her about the Woodgate book, and the price. Being my mother, and knowing me, she took out her purse from her handbag, opened it up, found a large bill, gave it to me and said to go back to the shop and buy the book. It is a loan I yelled when I ran back to the book shop. The owner was surprised to see me again, although I was probably not the first one to come back to his shop after hesitating over a price of one of his books. While he neatly wrapped the book, I told him that I was an editor for the Swedish rowing magazine and collected material for articles on rowing history. “Very good,” he said, but added, “oarsmen, do they actually read?”

Walter Bradford Woodgate’s Boating was the ninth volume of twenty-eight volumes of sporting books instituted by Henry Somerset, 8th Duke of Beaufort, who was the head editor which more or less was a titular editorship. The series were called The Badminton Library, or in full The Badminton Library of Sports and Pastime, and the “Badminton Library” was borrowed from the Duke of Beaufort’s grand country home Badminton House in Gloucestershire. In England the books were published by Longmans, Green & Co in London, and in the USA by Little, Brown & Co in Boston between 1885 and 1896.

Boating belongs to the genre of rowing books known as “how-to”. However, it is not only a textbook that teaches the skills of rowing and sculling, it also tells the story of the rich and vigorous history of rowing, starting with oar-powered vessels of the Egyptians, Greeks, and Romans. Woodgate, who had previously published Oars and Sculls – and How to Use Them (1875) (and later would publish Rowing and Sculling, 1896), had rowed at Brasenose College and was an Oxford winning blue in 1862 and 1863. He had won the Wingfield Sculls, the Amateur Championships of the Thames, in 1862, 1864, and 1867, and between 1861 and 1868 he had won eleven “pots” at the Henley Royal Regatta. One of his most memorable races at Henley was not a win, however. In 1868, in the Stewards’ Cup, Woodgate had his Brasenose four’s coxswain jump overboard at the start to lighten the shell. The four was racing down the course with Woodgate steering the boat from the third seat with a home-made device. It took the Henley Stewards by surprise, but when the Brasnose four crossed the finish line 100 yards ahead of the London Rowing Club, the Henley Stewards had collected themselves and disqualified Woodgate’s coxless four.

This was not the only hoax that Woodgate played on the Henley Regatta’s officials. Two years earlier, in 1866, he had entered the Silver Goblets twice, once as W. B. Woodgate with E. L. Corrie (Kingston Rowing Club), and once as Wat Bradford with M. M. Brown. Woodgate and Corrie came out as victors in this event, but after the regatta the Henley Stewards changed the rules so that no one could row under an assumed name. 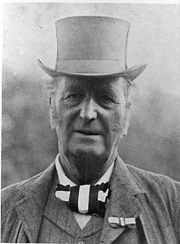 Although Woodgate seems to have been a real rowing rogue, the sport of rowing was probably the only thing he took seriously in life. He was called to the bar in 1872, coached Oxford crews and was the president of Kingston RC, and it is as a rowing authority that he is best remembered. In his well-versed and entertaining memories Reminiscences of an Old Sportsman (1906), he writes how very disappointed he was with the publisher of Boating and the book itself:

“I found myself saddled with responsibility of writing to order – in conformity with some dictated scheme; and had but little free hand in compilation and selection of subject germane to the title. I had a silly chapter, by a fourth-class oarsman (whose style and management had been the bane and wreck of Third Trinity and Cantab style generally in ’62 and ’63), foisted upon me. [Woodgate is referring to the chapter on rowing at Eton by R. Harvey Mason.] Likewise, various illustrations which to my mind were quite irrelevant and in some instances erroneous, but which sub-editorial autocracy of a scribe who had no aquatic science insisted on inserting; while illustrations suggested by myself as more appropriate were shelved on the pleas of space and economy.” [p. 241]

In a special Note in Rowing & Punting the authors state that “the present work – with the exception of a few illustrations which are reproduced from the former book on ‘Boating’ – is entirely new. Not a line of the original ‘Boating’ volume, published ten years ago, is retained.”

And so began my collecting of rowing books…..