Here HTBS continues with another rowing object/s in the HTBS show-and-tell mini-series. This time Göran R Buckhorn is showing a unique display plaque with medals, which once belonged to a well-known oarsman, coach, writer, editor and politician.

While I collect books on rowing, I don’t really have a large collection of rowing memorabilia like medals, pots, trophies, oar blades, etc. I think, I’m far behind my dear HTBS colleagues, who probably have drawers, cabinets and walls filled with rowing stuff. However, I’m happy to be the owner of  a few unique objects; one that’s going to be my ‘show-and-tell’ piece here. 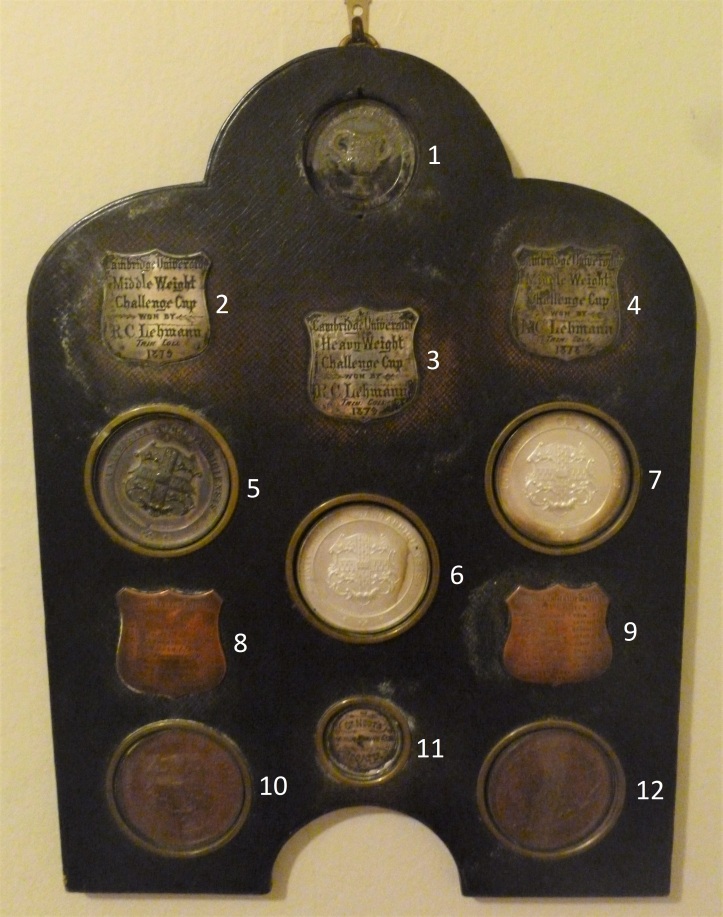 Rudie Lehmann was a journalist, editor, author, writer of light verse and an MP for the Liberals, but for us HTBS Types, he is mostly known as a rowing fellow; he is one of my personal rowing heroes. Lehmann was a fruitful coach – he had been, he wrote, ‘privileged to utter words of instruction to innumerable crews on the Cam, the Isis, and the Thames’; and he could have added foreign rivers and waterways in Berlin, Boston/Cambridge and Dublin.

Lehmann also penned several articles and books on rowing.  But while he was a successful writer, he was not that triumphant at the oar. He rowed for First Trinity Boat Club, was a captain at the club and competed in two Cambridge Trial Eights in 1876 and 1878 (see No. 8, 9, 10 & 12 above). His boat lost both years, and he never rowed in the Boat Race.

What is worth noting in the 1878 Trial Eight crew are two names, Charles Fairbairn, at the ‘4 seat’, who was Steve Fairbairn’s four years older brother, and James B. Close, who was a noticeably heavy coxswain at 11.2 st. (71 kg). Close had rowed in the Boat Race in 1872, 1873 and 1874. (Read about the Close brothers here.) Close was actually the Light Blues coach for the 1878 race. I wonder what happened to the chap who was going to steer this crew? (See Malcolm Cook’s comment below.)

Lehmann also raced at Henley Royal Regatta between 1877 and 1888, but he never won a heat. The wooden display plaque has a ‘prize medal’ for the Henley Visitors’ (No. 1), so this might be a memorial medal from 1877, when Lehmann rowed in the Visitors’. But it’s not a medal for first prize.

There is no year on the St. Neots RC’s medal (No. 11), but it might be from the club’s regatta held in 1877. The club’s website mentions that there were ‘several Cambridge College clubs’ competing that year.

The wooden medal display plaque once belonged to the great American advocate for rowing, the well-known Hart Perry. When I received this plaque as a gift from Hart’s widow, Gillian, in 2011, it came together with an original Vanity Fair print of Lehmann, who graced the magazine’s pages in January 1895.

And, no, the medal display plaque is not for sale!