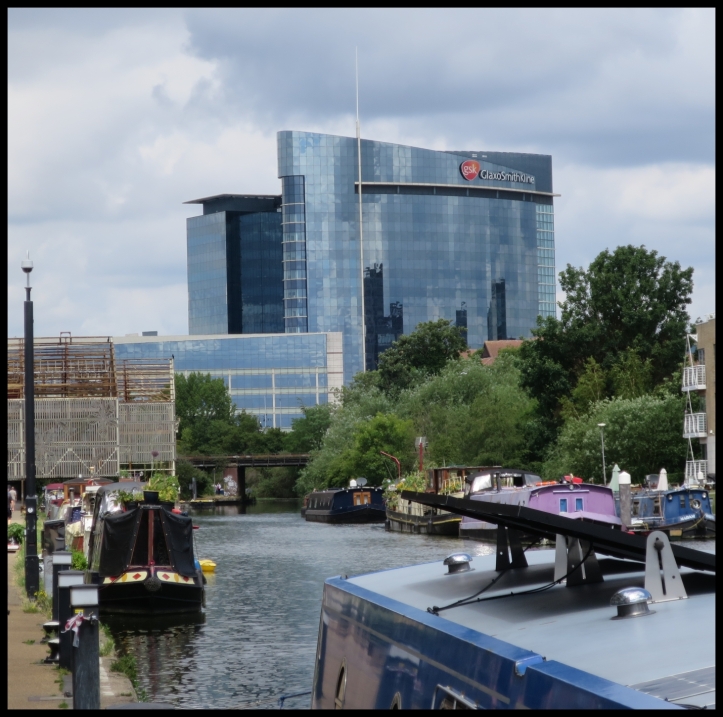 Daniel Walker explores some of the lesser known rivers that feed the Thames Tideway.

The Thames Tideway, the tidal stretch of the River Thames, flows for 95 miles from Teddington in West London to the Thames Estuary where the river disappears into the North Sea. Along these 95 miles or so, there are somewhere between 22 and 25 tributaries to the Tideway, it is surprisingly difficult to be exact on this point.

I was inspired to write this piece by first a fascination with the occasional glimpse one gets of a river mouth or an outfall, across the river perhaps or viewed from a single scull or an umpires launch on the Tideway, secondly by being lucky enough to live very close to Beverley Brook in Barnes and finally by a recent reading of Ben Aaronovitch’s fantastic novel Rivers of London (2011) in which Beverley Brook herself, the goddess of “my” river appears.

In order to maintain a semblance of connection to rowing, this article limits itself to the eight tributaries to the Tideway in the stretch above Putney Bridge expanded to nine with a specially permitted interloper that has a particular link to a Tideway rowing club. I hope that in due course, I will manage to extend my explorations down river and include all the “rivers” of London, many of which have been sadly lost to us as waterways open to the sky and are in the main now covered over and culverted under the roads and pavements of London.

I have relied on various sources to help me track down the tributaries, including the ubiquitous Wikipedia and the excellent LondonsLostRivers.com that provides a wonderful and comprehensive record of London’s rivers and their history. The pictures are all mine, as my boots can attest!

Starting close to the very western end of the Tideway the Sudbrook (‘South Brook’) rises in Richmond Park and having descended the western side of the park meets the Thames along the Richmond Amateur Regatta course, where it is almost entirely overlooked and unseen by the majority of visitors and competitors. Like many of its down river sisters, it is now covered or culverted for the final stretch and its meeting with the Thames is closed in an unflattering metal grating that can be found immediately beside the drawdock that is used for boating at Richmond Regatta. 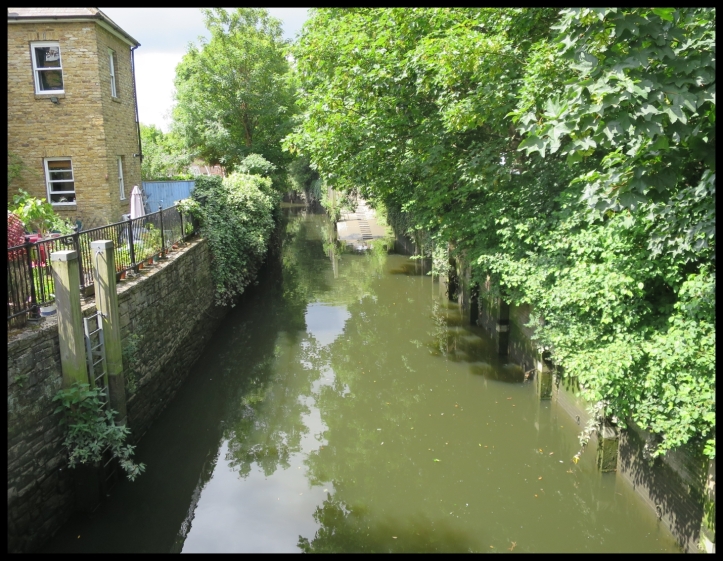 Dropping below Richmond Lock we pass the last lock on the Thames and the river now runs uninterrupted to the sea. The River Crane joins the Tideway on the north bank close to the top end of Isleworth Ait. Although not used by any of the larger rowing competitions this stretch is the upper marshalling area for the United Hospitals head race. United Hospitals Boat Club being the co-ordinating body for a series of competitions organised amongst the University of London and Imperial College medical and veterinary schools.

The River Crane is about 8 miles long and runs through a delightful recreation ground and nature reserve – Crane Park – which was an historic location for the manufacture of gunpowder, the Hounslow Powder Mills. The mills themselves have gone but the Shot Tower still stands.

Fed from the River Crane is the artificial Duke of Northumberland’s River, dug in Tudor times to power a mill and to supply the ponds in the Duke’s estate, Syon Park. The river continues beyond Syon Park and flows into the Thames behind Isleworth Ait, out of sight of the crews marshalling for the Hospitals Head.

The River Brent shows an imposing face to the Thames joining the river just above two closely adjacent islands, Lot’s Ait and Brentford Ait. One of the few Thames tributaries that could accommodate a rowing boat the Brent provides the connection between the Thames and the Grand Union canal. 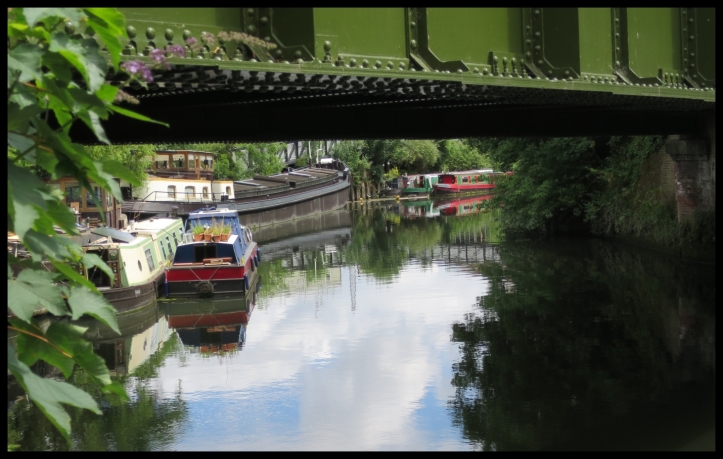 Moving away from the Tideway the Brent provides an unlikely juxtaposition of calm waterway and the office blocks that line the elevated section of the M4 motorway as it heads west out of London. 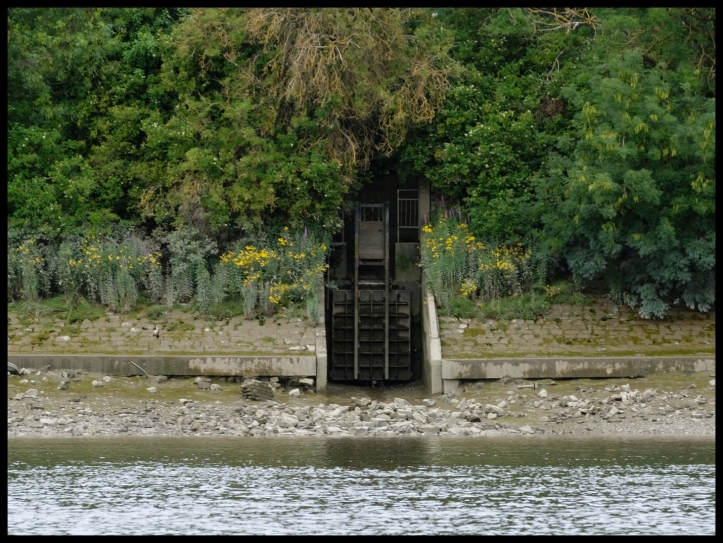 The next four tributaries all join the Thames along the familiar waters of the Championship Course from Chiswick Bridge to Putney, however, I would be prepared to bet that the majority of rowers will only have heard of one of them.

After leaving the Brent above Kew Road Bridge it is a surprisingly long journey downriver through Kew Rail, Chiswick and Barnes Bridges before we find Bollo Brook, which joins the Tideway roughly opposite the now largely disused Small Profits Dock at Barnes. Bollo Brook once provided water for the water features of Chiswick House but is now carried in underground pipes. There is little sign above ground of Bollo Brook and its outfall is an unremarkable concrete and steel structure just before Chiswick Pier. 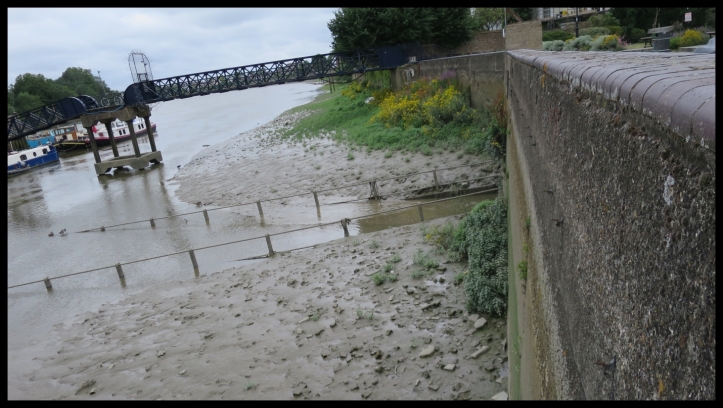 Parr’s Ditch, a man-made watercourse flows the short distance down from Brook Green to the Thames, marked the historic boundary between the now-combined boroughs of Fulham and Hammersmith, meets the Thames practically underneath the pontoon belonging to Fulham Reach Boat Club. On the river wall beside the bricked-up outfall is a boundary marker dated 1865 – Hammersmith on the left; Fulham to the right.

In a pleasing throwback one of the new roads created as part of the Distillery Wharf development is called Parr’s Way. 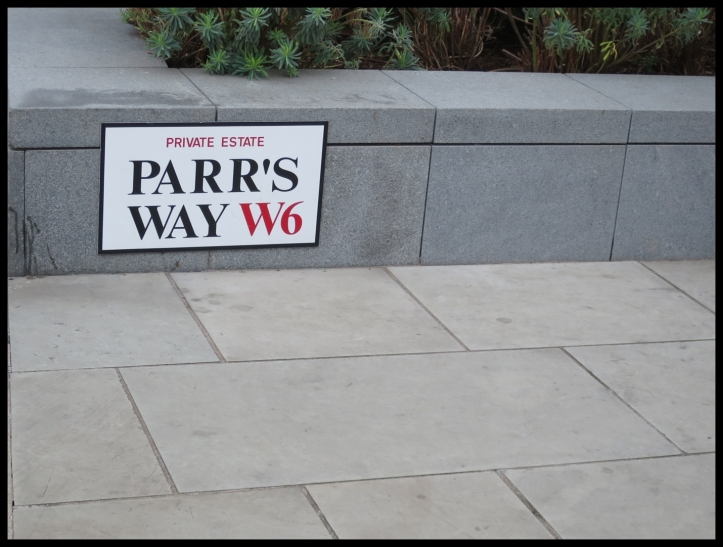 Beverley Brook is, I suspect, the only tributary to the Championship Course that is properly known to the rowing community. So named because it once supported a population of beavers (the beaver was extinct in the UK for at least 150 years but with help is slowly becoming re-established in remote parts of the UK), Beverley Brook is a substantial stream that joins the Tideway just above the Black Buoy (which weirdly is now yellow) and Putney Embankment. Starting in Worcester Park, Beverley Brook flows for nine miles past Wimbledon Common and Richmond Park before it reaches Barnes. 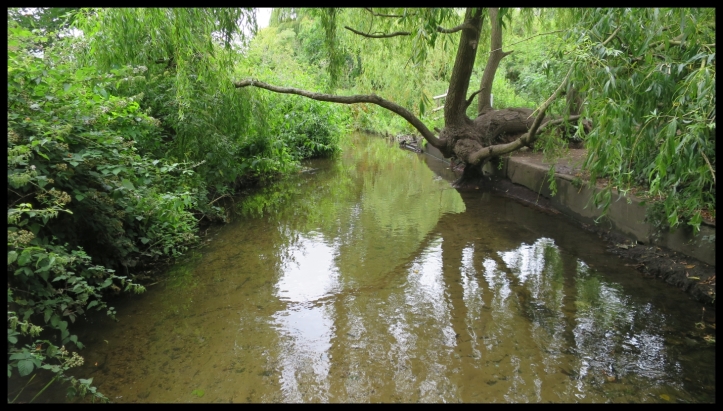 As Beverley Brook glides through Barnes the character of the brook is multi-faceted, from a perfect country stream to a tightly enclosed urban waterway running between houses, before its final run through Putney Common and a flood gate controlled exit into the Thames. 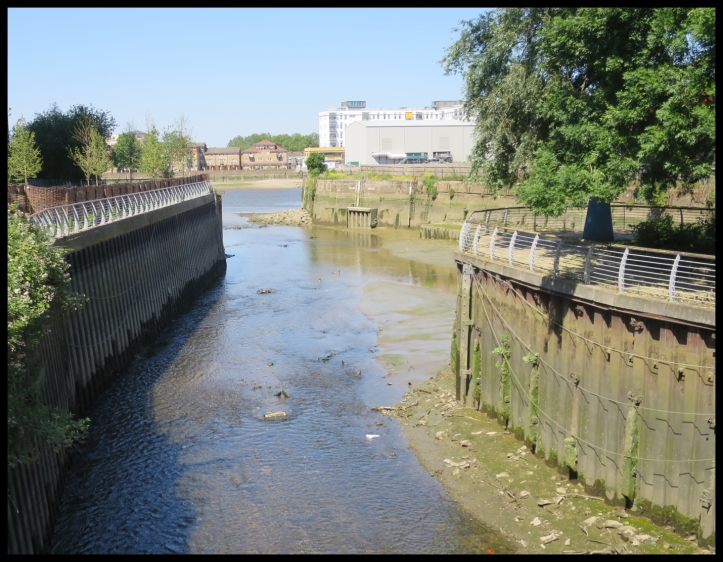 Allowed into this piece by special dispensation the River Wandle was the original home of Vesta Rowing Club before they moved to Putney Embankment in 1875. Today, there is no rowing on the Wandle, save perhaps the odd dinghy that launches from the houses adjoining the River.

The Wandle joins the Thames below Fulham Railway Bridge in what is today a fairly silted up small estuary. The primary flow of the Wandle is controlled by sluice gates and a small weir. 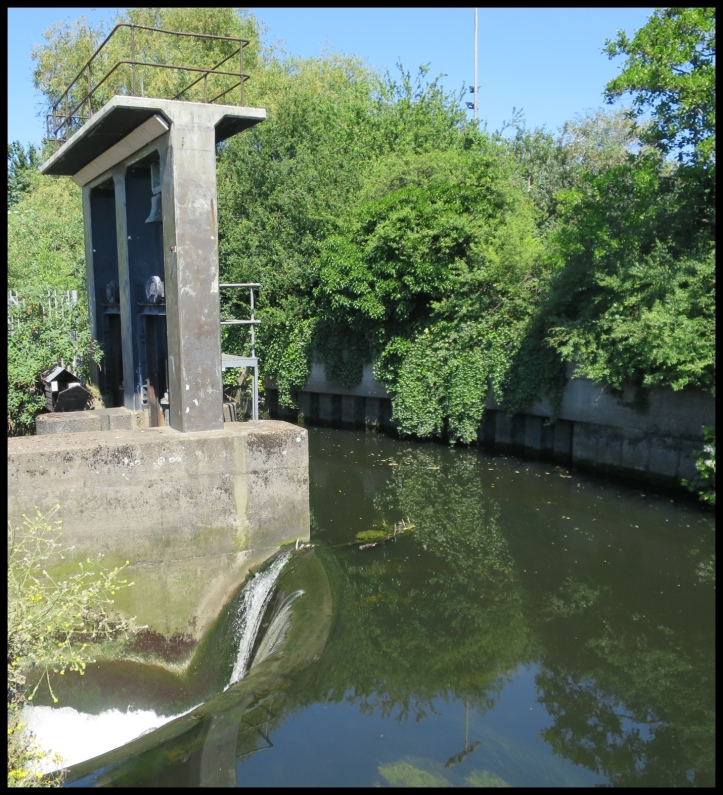 Following the Wandle upstream, we leave the Thames behind and immediately dive into developed and industrial Wandsworth, the Wandle briefly disappears underneath a shopping centre but resurfaces to be followed by a simply delightful path and cycle way – the Wandle Trail which accompanies the Wandle for 14 miles towards its source in South Croydon.

Note: I have made up the word Abertideway to refer to the trbiutaries of the Tideway. Aber is a Celtic word meaning confluence or mouth, it is common in place names where two rivers meet or a river meets the sea, particularly in Wales (such as Abergavenny) and Scotland (such as Aberdeen). I briefly toyed with Invertideway using the very similar Celtic word Inver.